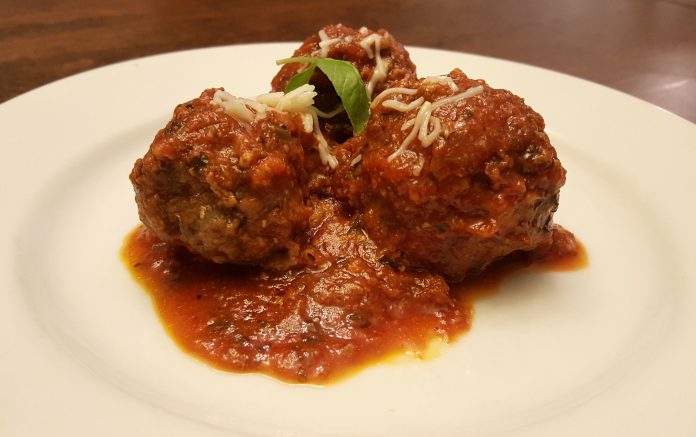 We’ve hit that time of year when hunters and gathers alike are looking for new and creative ways to enjoy venison. Earlier this year we made smoked venison chili in the Big Green Egg which has served as a delicious inspiration to dig through the recipe book and find other things to try. Today’s experiment takes a typical meatball recipe normally done in an oven roaster and heads outside to the smoker. What follows is an adaptation of Simply Recipes’ meatballs with ricotta in tomato sauce recipe. We’ve adapted the recipe for a low and slow approach in a Kamado style grill like the Big Green Egg in an attempt to showcase the venison flavor.

Venison is a lean meat that is best prepared low and slow to maintain tenderness and flavor.  Traditionally when preparing meatballs a myriad of meats are used which will bring their own flavors and fats to the party. This recipe leverages pork and ground beef to compliment and extend the venison.

One added bonus to this recipe is the remaining tomato sauce. On the outside chance there is any left over sauce it will retain the essence of the venison as well as the hickory smoke. This tomato based sauce is a delicious way to enhance any bowl of pasta and can be used to replace or supplement any dish that calls for tomato sauce.

Configure your kamado style grill for a cook using a cast iron dutch oven.  Avoid using the lid on this recipe so as to allow the smoke flavor in and infuse the meatballs throughout the cooking process. Place the dutch oven in the grill and heat up to 250 degrees.

Time to get those hands dirty.

Before starting this next step you may want to find a roll of paper towels and keep them in an easily accessible location because things are about to get messy!

In a large mixing bowl add the venison/pork, ground beef, bread cubes, parsley, oregano, fennel seeds, red pepper flakes and salt. Before you have a chance to talk yourself out of it mix the ingredients with your hands until thoroughly integrated being careful not to over mix.

In a separate bowl whisk the eggs until uniform in consistency and texture. Add the eggs to the meat mixture and, using your hands once more, mix until thoroughly incorporated while being careful not to over work.

At this point you can season to taste.   We here at tEGGsty do not recommend tasting raw meat (unless its sushi).   To test the seasoning form a small patty with your hands and heat in a small skillet on the stove ensuring to heat to the recommended internal temperature of 165 degrees.

Transfer to the Grill

If looking to add a little smoke to the flavor this would be the time to add some wood chunks to the fire.   We used hickory chunks and would recommend it going forward as the resulting smoke flavor was a player in the over all meatball mouth party but not overwhelming and show stealing as we expect a stronger smoke, such as mesquite, may have produced.

Add olive oil to the now preheated cast iron dutch oven. Spread out the meatballs in the dutch oven so they take up the entire cooking area. It is important to remember that any area where two meatballs touch will not be getting that delicious smoke flavor during the cook.  The meatballs will shrink as they cook.

Allow the meatballs to cook uncovered and without stirring for about 45 minutes until they have started to brown.   Add the tomatoes and continue cooking, stirring occasionally, for 4-5 hours – or until the internal temperature of the largest meatball reads 165 degrees.

When done be sure to reserve any excess tomato sauce in the pan to serve atop the meatballs.  Delicious.

There’s no wrong way to eat meatballs and these smoked venison meatballs are no exception. Enjoy as a sandwich in a roll or by themselves adorned with fresh basil leaves and freshly grated Parmesan cheese.