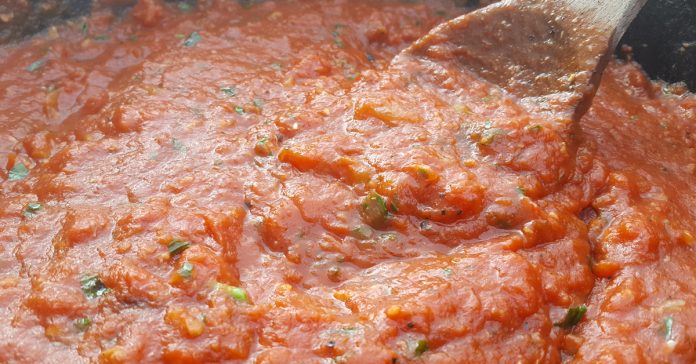 Recently we took a swing at a Deep Dish Pizza on the Big Green Egg.  This is adapted from 12 tomatoes Chicago-Style Deep Dish Pizza recipe.  There were a lot of lessons learned along the way as trails were blazed and comfort zones in attempting the pizza on a kamado style grill.  The final product proved worth the effort as a delicious pizza pie emerged that would surely please even the most discerning palate in the windy city.

One wonderful surprise that came out of this recipe proved to be the pizza sauce within.  The sauce blends all of the many flavors that one would expect on an excellent pizza.   It is thick and, when made on the Big Green Egg, layers in a rustic wood smoked essence.   The recipe works well on the kamado style grill because it calls to be simmered for a long time and reduced a full two cups.   Simmering uncovered on the Big Green Egg allows the grill to do what it does best.

The sauce can, of course, be used on the deep dish pizza, or a thin crust, or anywhere pizza sauce is called for.  We have found the sauce to stand on its own as we have jarred it and replaced the store bought pizza sauce of yesteryear.

Melt the butter in the preheated dutch oven stirring frequently.

Add the onion, oregano and 1/2 a teaspoon of salt. Allow to cook, stirring frequently, until the onions begin to soften up – about 10 minutes.

Add the garlic and cook for approximately 1 minute or until aromatic.

Add the tomatoes and sugar and mix thoroughly.  Allow to simmer uncovered at 300 degrees for approximately 30 minutes.

Remove the sauce from the grill and stir in the fresh basil and olive oil.  Add salt and pepper to taste.